About the artist Jesse Lee Jacobs

Jesse Lee Jacobs was born on September 22, 1975 in Philadelphia, Pennsylvania. Living in one of the oldest cities in America, he discovered art in many forms; music, woodworking and ultimately, silversmithing.

Early creative expressions came in the form of song as early as age 8. Jesse would sing and play every instrument, yet deplore the idea of being referred to as a "musician" rather, as an artist who feels sound is color. His experiences, as well as his interest in Chinese philosophy, dreams and astronomy would become relevant later in his work. The love of working with his hands came after high-school when he was employed as a woodworker in various cabinet shops in Philadelphia. As he grew tired of blue-prints he would find his second passion in college ... metals. The evolution to becoming a silversmith was both inevitable and natural. With metals, Jesse could ignore the rigid angles of cabinetry and bridge the gap between melody and shapes.In the first months of working with fire and metals he started having dreams of calming triangles and saw a direct correlation between metal shapes and the possibility of their endless transformations.

Jesse is admittedly obsessed with making a mark. To him, metals have a wonderful permanent quality. Jewelry is passed down through the generations and essentially is the people, creatures and stories of yesteryear. He loves this idea and it would be a major factor which would drive his hands to work. But, later to survive the harsh framework of modern living, he realized he must sell his work. Not only for selfish reasons -- such as eating -- but, also to continue the creative flow as an artist, to adorn many and to discover even more art.

Besides consistently making new pieces in silver, and now in leather, Jesse continues the search for more outlets for creativity. His newest muse came in the form of a gift -- a camera. He is now playing with the art of film-making, including stop motion animation, soundtracks, and even editing.

Jesse moved to Los Angeles in the year 2000. His jewelry made its way into many prestigious stores. Stylists pull his work for photo shoots and television. This pleases Jesse as he believes that television, fashion and film is modern-day mythology. As a designer, he describes his work as either looking like something found in an archaeological dig, or futuristic jewelry for super-heros ... Either way it is truly glamorous. Up until 2004, Jesse-International only crafted one-of-a-kind pieces. We're proud to announce you can now check out Jesse's new production line at LiberalJewelry.com. Also, for Jesse's music check out JesseLeeJacobs.com. 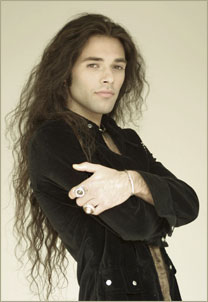